Revel in uncompromised East to West panoramas of the Golden Gate Bridge, North Bay, and the expanse of the San Francisco Bay in this outstanding 2 bedroom, 2 bathroom full floor flat with outdoor space. Original period details bring all the charm of historic San Francisco together with modern amenities and over 1,700 square feet of living space in a boutique 3-unit building with an established Pacific Heights address. Enjoy an ideal combination of upscale Pacific Heights boutiques and the Marina's favorite foodie hot spots at the crossroads of the Marina and Cow Hollow, with close proximity to shopping on Union, Fillmore, and Chestnut Street, and convenient proximity to the Marina Green.

A central hallway connects the entertaining space to a peaceful sitting room, and two large bedrooms that share a south-facing balcony. The primary bedroom includes an en-suite bathroom with a marble-finished bath, as well as a cedar-lined walk-in closet. Completing this offering are an updated common full bathroom with a glass-enclosed shower, a hall closet, and in-unit laundry. Amenities include a sunny, shared backyard, 1-car garage parking, and additional shared storage (used as a wine cellar). 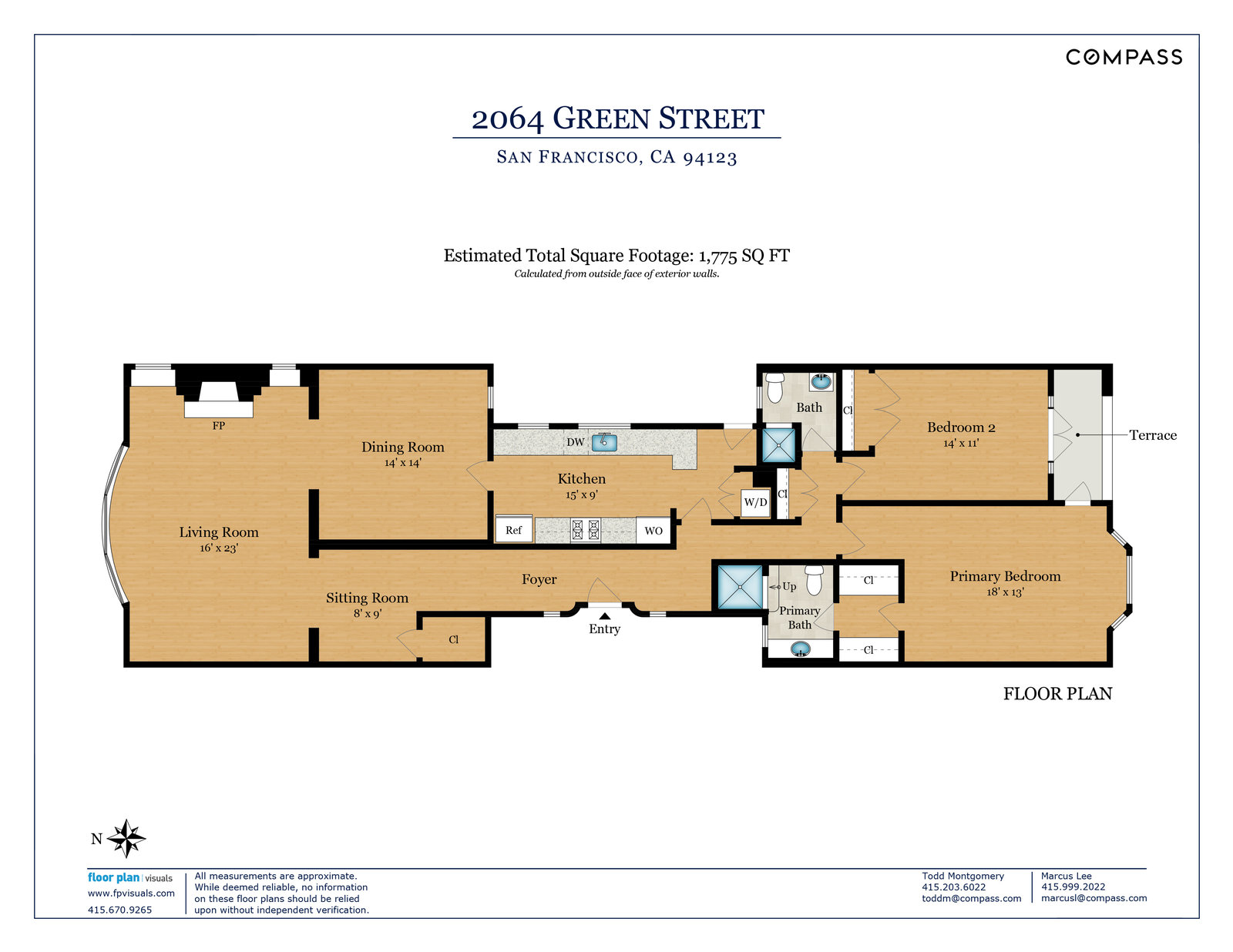 Pacific Heights is in many ways the pinnacle of San Francisco living. Bordered on the north by Cow Hollow with Lower Pacific Heights to the south, Nob Hill to the east, and the Presidio to the west, Pacific Heights occupies a ridge jutting nearly four hundred feet above its neighbors. The steep elevation offers a sense of remove from the surrounding areas, especially when the fog rolls in and much of the hill remains in its own sunny microclimate. As a result of this singular location and its breathtaking views over the city and across the Bay, Pacific Heights is arguably the most exclusive neighborhood in San Francisco, if not the entire region.

While every and any private lot in Pacific Heights is coveted—and rightly so—the neighborhood’s public spaces are also among the city’s grandest. Ascending over the course of more than a city block, the Lyon Street Steps anchor the neighborhood’s northwest corner, its manicured hedges culminating at the three-block stretch of mansions known as Billionaires’ Row. Although this area presents an understandable point of interest for tourists, the steep climb deters most, freeing the community of such distractions.

Alta Plaza Park and Lafayette Park are beloved by residents of Pacific Heights. Both parks feature public tennis courts, canine play areas, and stunning vistas, with views of the Golden Gate Bridge, the Marin headlands, Alcatraz island, and the southern reaches of the city. Stacked in a series of terraces like a wedding cake, Alta Plaza Park affords some of the city’s most sweeping panoramas, as well as a basketball court, playground, and vast open lawns. The beneficiary of a ten-million-dollar upgrade in 2008, the informal layout of Lafayette Park makes the most of its towering trees and gently rolling terrain, especially with the innovative playground at its center. Its equipment and landscape features designed with curious kids in mind, the playground alone would make Pacific Heights an exceptional place to grow up. By way of a shared border near the Lyon Street Steps, the neighborhood also has its own gateway to the breathtaking Southern Wilds of Presidio National Park and the miles of picturesque trails it holds.

Fillmore Street is the axis of shopping and dining within Pacific Heights, offering impeccably curated boutiques and elevated takes on creature comforts like Neapolitan pizza (Delfina), coffee and espresso (Blue Bottle), and ice cream (Salt and Straw). Pacific Heights is also home to Sorrel, where chef Alex Hong earned his 2019 Michelin star with the Italian-inspired California cuisine he creates in this tasteful and inviting space. For everyday needs, there are a number of smaller food markets within the neighborhood’s borders, as well as a Whole Foods Market just steps away. Living in Pacific Heights, one is both centrally located and above the fray, savoring peace and quiet—and singular views—with the city’s best features close at hand.